Home/Latest News/Jacqui Morley takes on a trial which takes the biscuit – to get an insight into life for those who cannot see or who have reduced vision.
Previous Next 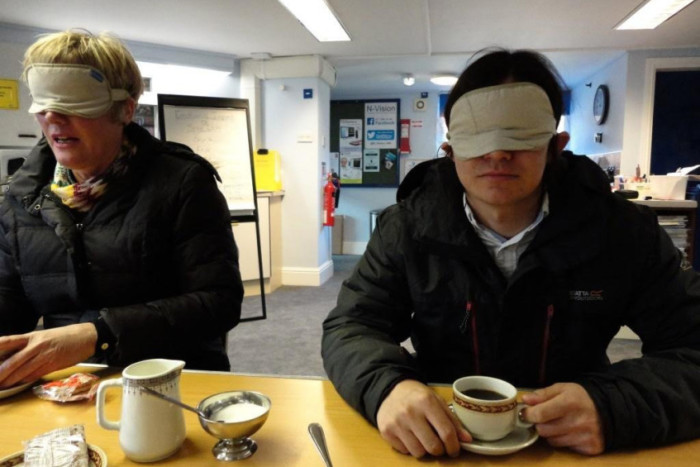 The biscuits are so near yet so far. Blindfolded, it’s hard to fathom which packet contains the chocolate ones.

I reach out, nearly knock over the milk, then bypass telltale rectangles of boring bourbons to something – promising.

If that’s not a packet of chocolate biscuits I’ll eat my – crumbs!

I’m on a visual awareness training course which takes the biscuit – in every sense.

The challenge has been thrown down by N-Vision, The Blackpool Fylde and Wyre Society for the Blind, at Bosworth Place, Squires Gate.

The term blind has fallen from grace although it remains in the society’s title.

While Americans prefer the term ‘legally blind’ Brits opt for visually impaired or sight impaired. “The words used can have a negative,” explains the charity’s community services manager Judith Harrison. “So many emotions are experienced with sight loss.”

The emphasis is on living with sight loss – not just coping with it.

As low vision worker Brian Casey, who describes himself as a ‘modern visually impaired person’ it’s about “independence, not dependence.”

The short course is a lesson in perspective for others.

The next is being held at the centre on June 13, places still available. There’s also a sight loss awareness day coming up on May 11 from 11am to 3pm at Barton Grange Garden Centre, Brock, a showcase setting for the charity’s work – and still well within the ‘blind society’s catchment area.

If, like me, you’re one of the six in 10 who wear glasses or contact lenses, you’ll know that feeling of panic when you can’t find them first thing.

But the long and short of it is – our sight issues can be corrected by prescription lens.

What if life was permanently a blur – or worse?

Back in her native Poland Iwona studied to be a physiotherapist and did a lot of voluntary work.

“I feel my destiny is calling me to work that helps people. I want to extend my skills so I can help them more.”

Janet Bramwell, a My Guide volunteer, supports a lady with sight loss, and assists with guide dog puppy walking/boarding.

Both help read the news to subscribers to the charity’s Talking Newspaper, which celebrates its 40th anniversary at the end of June.

As for me? A recent health scare saw me fast tracked from optician to eye clinic at Blackpool Victoria Hospital within a few days – which were spent agonising over the ‘what ifs’ … what if I can’t drive, work, be an effective carer to my mum… until those fears proved groundless.

We all soon realise how covering your eyes helps you see a bigger picture – an insight into the world of others. We’re challenged – blindfold – to find enough loose change to pay for a cuppa. No cheating by using a new look £1 as no change given. The distinctive shape of the 20p gives me a head start and I later learn that 10p and 5p silver coins are ridged at the rim, copper coins smooth. The new £1s are both ridged and smooth at the side.

My cuppa is soon on its way and it’s a challenge to sip without scalding.

Outside, blindfolded, we don’t see the high visibility green line which enables those with limited sight to get their bearings from Starr Gate tram stop, via the nearest bus stop, to the centre. It bypasses static hazards and is a triumph for low vision worker Brian, 51, who lobbied for it.

He travels into work by tram daily from Fleetwood and encourages others to use public transport rather than rely on friends and relatives for lifts. One of his successes is a feisty former ATS veteran Marjorie in her 90s – it takes her two buses each way. A round trip by cab would cost £30. “I don’t get discount,” she adds. Like Brian, Marjorie stresses it’s important not to ‘lose your confidence with your sight.’

For many the vision left isn’t necessarily helpful. Life’s a blur. You may have sight in one eye but not another (stroke or accident or illness).

Macular degeneration – by far the biggest cause of sight loss for 80 per cent of the charity’s clients – affects central vision but may leave some peripheral vision. Other conditions claim that. Trauma – as in Brian’s case after sports injuries – may leave sight shattered like broken glass.

Accompanied by Judith Harrison and Stephanie Beasley, volunteer coordinator, we brave the steep steps of the railway bridge, cross roads, pass railings, bollards, car parked on or driving across pavements, avoid low lying branches, bikes, scooters and dollops of dog dirt – including right outside the centre used by more than 2,000 visually impaired clients and residents of the Princess Alexandra Home.

It’s in a predominantly residential area just off the beaten track of the bustling retail, tourism and business and enterprise district of Squires Gate.

A short walk round the block is an exercise in blind trust in our guides and the clarity of information they give.

The blindfolds come off after the cuppa and we learn, with some surprise, that we’re back where we started at the Low Vision Centre.

By far the greatest lesson in perspective comes when we don the glasses that replicate the restricted, impaired, low – or no – vision incurred by different eye conditions, accidents, illnesses, injuries.

And it’s nothing, but nothing, like the blur caused by a pair of missing specs first thing in the morning.