Stella give their star centenarian a treat

Stella give their star centenarian a treat 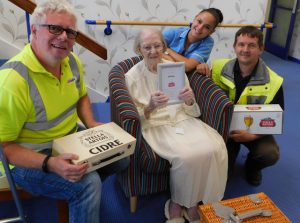 The Sun, the BBC – including in Turkey – The Mirror, the I , Metro, LadBible, Huffington Post and more picked up the story, some posting birthday greetings on social media and wishing Eileen well. The international press followed suit. Put ‘Eileen Maher 100’ – or ‘Stella and custard creams’ – into a search engine and page upon page of links to coverage will follow.

And all because the lady loves –  a can of Stella lager with her dinner and/or as a nightcap. “It helps me sleep.” Eileen ditched the celebratory sherry and bubbly served up at the Princess Alexandra Home on her milestone birthday in favour of Stella.

The Darwen born weaver, munitions worker and baker’s legions of fans worldwide now include Lancashire InBev brewery boss Stanislav Chulkov who popped over from the Samlesbury brewery – which produces Stella Artois – with a belated birthday treat. 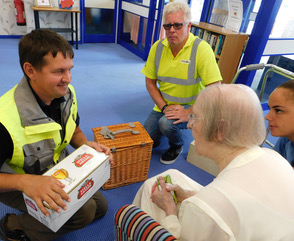 Stanislav, accompanied by master canner Alan Meadows carried a large hamper into the Princess Alexandra Home,  bearing bottles of Stella Artois, a 10 can pack, some Stella Cidre boules – throwing caution to the winds – and a 100th birthday certificate of thanks from the company.

“Mrs Maher really is a star,” said Stanislav.  “It’s a real honour to meet someone who has seen so much of life.”

While Eileen attributes her longevity to “being content and feeling loved” her daily can of lager and some custard creams have helped boost quality of life for many years.

“We know Eileen loves her Stella here, but we were surprised at just how interested the press were,” said care services manager Elaine Wright at the Blackpool Fylde and Wyre Society for the Blind-run care home.

The venerable Eileen took the media frenzy in her stride. “It’s just because I’m 100,” she said. “There can’t be that many of us.” 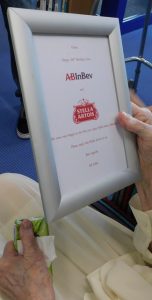 After graciously thanking brewery boss Stanislav for her belated gift, Eileen made him carry the can for having allegedly “changed” the recipe of her favourite tipple.

The grievance had clearly been bottled up during Eileen’s stoic 45 minute wait for her VIP visitors.  “What have you done to the recipe? Why did you change it?”

“We haven’t!” Stanislav protested. “We’ve been making Stella to the same recipe in Samlesbury since 1978. We are one of the top three of the 29 breweries producing Stella globally.”

“Well, it’s not a patch on the original,” insisted their 100-year-old global goodwill ambassador.

That said, the original Belgian heritage brew can trace its own roots back even further than Eileen – to 1366.

Three Cheers! for both?