Chris Carter is marching to his own beat as drummer for Collabro’s 10-week 51 date UK tour (which started on Feb 10). 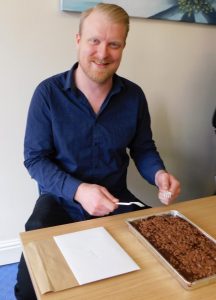 Chris, who oversaw production of N-Vision’s Talking Newspaper for 300 blind and partially sighted listeners across Blackpool Fylde and Wyre, says the “opportunity of a lifetime was too good to miss.”

As colleagues gathered to wave him off from the Bosworth Place, Squire Gate, base of the charity which gave him first job on leaving university, Chris said the icing on the cake would be playing the Opera House Blackpool on February 23 – his 36th birthday.

N-Vision CEO Ruth Lambert urged him to “fulfil his dream, have an exciting future – and come back to tell us all about it.”

Chris worked part time at the charity and is also a singer, songwriter, producer and multi-instrumentalist. He co-produced Collabro’s album Road to the Royal Albert Hall –where the tour ends on Saturday April 20.  Collabro won Britain’s Got Talent in 2014 and haven’t looked back since.

Chris, the charity’s former T technician, explains: “I got involved through my friend Ed Rugman who is Collabro’s musical director. I’ve known Ed for a number of years. He became their musical director in 2017 and we produced certain material, including several tracks, and worked together really well.

“We combined our talents and set up a company Ten Forward Music, and were approached to record the album, Road to the Royal Albert Hall, which announced this tour.

“Collabro are the number one musical theatre group, for the most part contemporary. I’m looking forward to one of my favourites Defying Gravity from Wicked, the Wizard of Oz prequel, as it has driving rock drums. I also like the bigger orchestral arrangements, such as Never Enough from the Greatest Showman.

“Music has always been part of my life. My formal education was in design and illustration. I got a degree in technical illustration in 2004 – not long before I joined the Blackpool Fylde and Wyre Society for the Blind, now N-Vision.

“It was ahead of its time in terms of developing the technology, and the next step was producing audio content accessed online – the principle was amazing, but the technology and client base weren’t ready. If we’d had the iPad and smartphones and assistive technology back then it would have taken off, but the trial online proved it could be done, and made it accessible to the world.

“My job morphed. I was technical coordinator with Blue Iris, I’ve been a graphic designer – I designed the very first N-Vision logo. I like the rebrand. It’s more modern. Good marketing shows it can be done – look at Trinity or Brian House. They don’t state what they do but people just know them.”

Chris, who also plays trombone, cello, keyboards and guitar, has grown up with music. “Most of the family play, my dad has always had a studio. The music you hear with the Talking Newspaper on SoundCloud is mine. I have two albums on iTunes at the moment, one from 10 years ago.

“I’ve never had an ego, I don’t push myself, possibly to my detriment. For me, music, first and foremost, is for pleasure – and if it pays a wage that’s fantastic.”

He’s excited about the tour. “I’m even looking forward to living on the road on the tour bus. I’d have loved to stay at N-Vision but this something I have to do. I’d be stupid not to do it. If this opportunity had come along 10 years ago, I’d have been scared.’

He’s in training for the demands of the tour. “I played Lowther Pavilion with Collabro last summer, but this is going to be intense – 51 gigs over 10 weeks. 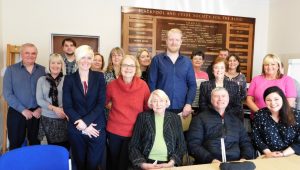 “It will take its toll, so I need to make sure I play every day leading up each gig for at least an hour, running through the songs, doing a lot of stretches. I’ve played in heavy rock bands where I’ve ended up with nerve twinges in my arms. Proper technique is key.”

He concludes: “I’ve no idea what the future holds but I’m hoping this is just the beginning.  I’d like to think I’d still have some involvement with N-Vision at some point down the line because I’m very passionate about the development of Talking News and it would be great to come back either to advise or be part of the next transitional phase.”