N-Vision has been sharing The Joy!

Home/Latest News/N-Vision has been sharing The Joy!
Previous Next

N-Vision has been sharing The Joy! 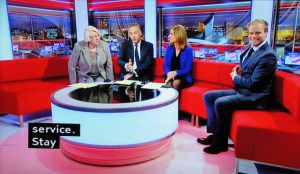 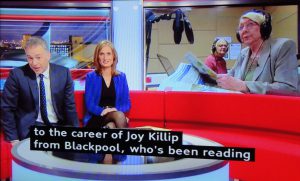 Our veteran volunteer and Talking Newspaper Reader Joy Killip, 93 years young, not only hit the headlines in her own right – but became a BBC North West Tonight ‘anchor-woman’ for the primetime regional news programme.

Joy and other Talking News regulars. – and listeners – featured in a lovely report from the charity’s own studios by BBC NWT presenter Ian Haslam.

One of the most heart-warming moments came when Talking Newspaper regular listener Tom Critchley who’s heard but never seen his favourite presenter got the chance to meet her – as the charity’s popular Simply Synapptic group was on site when BBC NWT arrived.

But the best was yet to come. The TV team were so captivated by Joy’s charm and charisma they invited her back to the studio at Media City Manchester to join the regular presenters Roger Johnson and Annabel Tiffin – and introduce a chilly bulletin from weatherman Simon King.

The young woman who made it all happen – UCLAN student Molly, herself from Blackpool, and on work placement at the BBC for a week, took Joy under her wing while they waited for the cameras to roll.

Molly had spotted a story about Britain’s (arguably) longest serving news reader in The Gazette and contacted CEO Ruth Lambert to ask if she could follow it up for the BBC’s digital news site. Joy first joined the society as a volunteer and fundraiser in 1963 and has been with the Talking Newspaper from the very start – coming up for 41 years in summer. The BBC report also featured photographs of a much younger Joy in her theatrical heyday – starring in Noel Coward’s Bitter Sweet and playing the lead in Hello Dolly!

Yet the veteran theatrical owned up to stage fright on the night.

“I was terrified,” Joy told N-Vision. “It was the worst stage fright I’ve ever had. I felt sick with nerves.  In a way it’s good that it all happened so fast – I agreed to the interview a couple of hours before Ian Haslam turned up at the Talking Newspaper studio.  I’d recorded an interview with Molly, who’s a lovely young woman, the day before at short notice too. If I can help promote the society I will.

“So, it didn’t give me time to think about it all. If it had been happening the following day I’d have had a sleepless night. One would have to be very blasé not to suffer stage fright – and I always had that before a show but nothing like this!  I had a lovely time but I didn’t even record it so I’m not sure how I did. I didn’t expect to be on screen for so long.

“I’m very pleased that the word is getting out on all the good work N-Vision does – and  I’d like to thank all the staff and volunteers and listeners who rallied again at very short notice to help.

“My son went with me and thought it was wonderful. But when I got home  – and I’m no drinker – i poured myself a glass of wine and had a cigarette to calm down.”

The charity will be ensuring Joy gets a copy of the broadcast.