Judith Harrison and Christine Farrell retire after 20 and 32 years

Judith Harrison and Christine Farrell retire after 20 and 32 years

Judith Harrison and Christine Farrell didn’t want ‘a lot of fuss’  about their retirement after 20 and 32 years, respectively, at N-Vision.

We’ll see about that, others thought…

So, clients gathered in force at the sight loss support group meeting to say goodbye to two leading lights of N-Vision, The Blackpool Fylde and Wyre Society for the Blind.

Two boxes of tissues, placed strategically close to two bouquets of flowers from members of one the charity’s café clubs, gave some indication of just how weepy it was all likely to get.

Surprisingly, there were still some to spare – for all the goodbyes this week.

It’s the end of an era. Judith Harrison, community services manager,  and Christine Farrell,  social care organiser,  retire today – Thursday. Both admit that neither wanted to stay on without the other.

Both are highly qualified at helping others cope with the challenges of sight loss – whatever the cause. 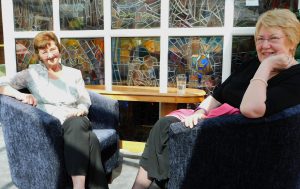 Judith arrived as a dewy eyed newly qualified rehabilitation officer for the visually impaired armed with two phrases which were to become her catch phrases “Don’t worry, I can be flexible” and the chill-striking “I’ve got an idea…”

Christine had a 12 years head start as a social work assistant for the blind, initially seconded to the society by social services before being employed directly by the society as welfare officer.

Some of the clients Christine met at the very start of her career with the charity remain with the society to this day.  One summed up the gratitude of those present.

Jim Bithell, who’s played championship flat green bowling at the highest level, lost his sight many years ago to retinitis pigmentosa. With wife Janet at his side he told Christine:  “I will never forget coming to the information session and meeting you and the team – and knowing there was always someone I could turn to. And that’s all I have ever wanted. We can’t thank you enough.” 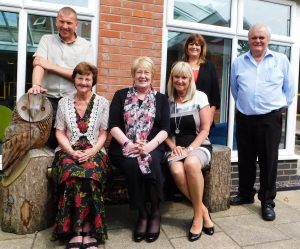 Judith and Christine have shared some of the lighter moments – such as when volunteer Joy Killip, who’s still reading the News in her 90s for the Talking Newspaper, used to tick them off for clod hopping across the floor upstairs … while she was recording below. “In those days we worked out of 25 Squires Gate Lane and the resource centre, as it was known, was on the top floor and the Talking Newspaper was on the ground floor.”

On another occasion, Judith took charge of a guide dog while the dog’s owner was guided to the field to experience blind archery. “Just as its owner was about to fire the arrow the dog sprang forward to join her, pulling me off the chair and letting go of the lead with the shock. All I could think of was the dog was going to be spread eagled on the target with an arrow through its chest. As I lay on the floor I looked to Chris to help and saw her sat there with tears of laughter streaming down her face. NO help at all . Only my pride was injured.”

They still giggle about the woman who arrived at the information session and when asked  what her eye condition was responded ‘immaculate conception’  because it was the closest she could get to macular degeneration.

The sight loss support group has its origins in the macular degeneration group which started in 1999 – even if a chorus of sighs initially followed Judith’s “idea”. 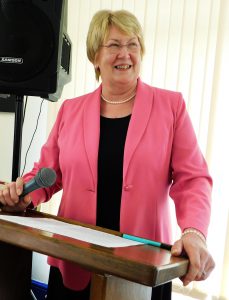 Judith told the group: “We didn’t know how many people we’d get to the first meeting but I remember the then chief executive running to the Princess Alexandra Home to get more chairs as people flocked in and in the end we had about 95 people attend.

“It is very rare for something to keep going for 19 years without radical change but that is testament to both you, and us, that together we found something that works.

“As a group you are a powerful force.  Without your support we would have never had the crossing installed at Squires Gate and the Promenade  which has made it much safer for those who use the junction. It was your support, too, that enabled us to get the council to insert zebra crossings into the Shared Space area in front of the Tower.

“So please, never give up the fight. It is because of those early links that we made with the council that we are consulting on issues relating to visual impairment and we are working closely with highways  with the work that is going on in the town centre now. 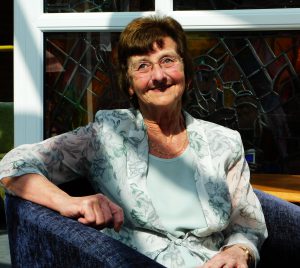 “Chris and I both agree that our jobs have been all we hoped they would be and it has been an honour and privilege to meet so many of you  who havershown such resilience during your journey towards acceptance of your eye condition.

“You have taught us things, you have inspired us with your stories, you have made us laugh, we have shared your tears and frustrations but most of all you have made our working life complete and for that we thank you.

The last word goes to Ruth Lambert, CEO of N-Vision:  “The 31st of May is a significant day in the history of N Vision as we say goodbye to Judith Harrison, Community Services Manager and Christine Farrell, Social Care Organiser who are retiring after having worked for the charity for a total of over 52 years!

“Their dedication and commitment in providing support to visually impaired clients and their carers and families over the years exemplary and deeply appreciated. They will also be dearly missed by their N Vision friends and colleagues. They are both wished richly deserved long, happy and healthy retirements.”